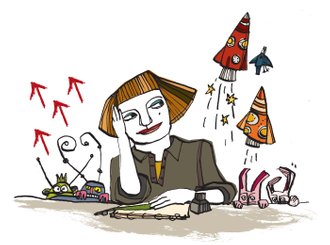 Gunnlaug went to Britain to study illustration and drawing, and has her degree from Birmingham Institute of Art & Design (University of Central England). She graduated with a First Class Degree in 2000, and won one of D&AD’s Student Awards, Young Blood 2000, for her final project.

Her first job after graduation was a regular job as an illustrator for one of Norway’s leading national newspapers, Dagbladet. They gave her the chance to develop her editorial illustration with no interference from any Art Director or Editor, and because of this she has developed her own voice and a distinctive style in her work. She has also illustrated for The Guardian and Financial Times.

Gunnlaug has also illustrated for design companies and publishers in Norway, Britain and Sweden. Her work has been exhibited in separate and collective exhibitions, and as an illustrator she is interested in commissions for all types of illustration work.

In 2004 she won a first prize in a storyboard competition arranged by Aardman and BBC Animation. She attended the Three Months Animation Course in Bristol the same year. And the plan is to develop this side of her work further.

Gunnlaug also works as a graphic and web designer - she has studied photography, visual communication, animation, drawing and graphic design. In 2005 Gunnlaug moved back to the country of her birth, Norway, after almost 10 years in England. In Britain she lived in Bristol. In Norway she lives just outside Drammen, one hour's drive from Oslo, with her husband and three children.